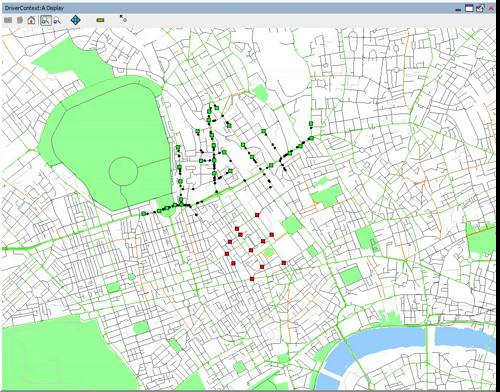 Much of my work attempts to recreate the macro from the micro.  That is the explanation of large-scale effects through the examination of small-scale behaviours.  I look at how these develop over space and time.

So, more specifically, I look at how road congestion forms in cities and how we, as travellers, all contribute towards it.

As part of my early work on this stuff, I developed a simulation looking at how traveller decisions impact on the flow of traffic in adverse situations.  This consisted of the development of an Agent-based Model (ABM) using the Java-based Repast Simphony framework.  After a fair bit of faffing with Repast (which, I should add, is great although has a considerable learning curve in comparison to some ABM software), I have a model that demonstrates the impact of road closures across a population of driving agents.

The video below shows how the population of individually-cognating agents move from an area of origins (in green) to an area of destinations (in red) through London.  All of the agents move through geographic space, specifically an area around UCL in Euston.  So, this first video shows the normal situation, the next video will show how that changes once we mess things up a bit. (By the way, the video takes a few seconds to get moving, just allowing me a few seconds of in-lecture explanation).

Although the model is relatively simple in traffic simulation terms (with no traffic lights and regulations etc), I think it does show where concentrations of traffic form.  Particularly through the Euston Road/Tottenham Court Road junction.  So, what would happen if we closed this junction?  This…

I think it’s interesting to see the redistribution in traffic around the network.  Knowing that this junction is closed, you get a lot more movement along other roads suggesting that traffic would be considerably slower in these areas.  Clearly, the exact where’s and when’s in this scenario are some way of what reality might show.  Not only do we not have the impact of road regulations, but each individual holds a perfect knowledge of the network, proceeds towards their target along the shortest path and has prior knowledge of the closure ahead.  These are three important aspects I address in other pieces of work that I’ll put up later.  I also realise a bit of flow data would be quite useful here, but considering the pure conjecture of this scenario I’m not sure it’ll add much!