Something I have been thinking about recently is the possibility of integration between GIS and space syntax.  The motivations are very clear.  Space syntax represents a compelling quantitative model of human behaviour and movement.  While the understanding of human systems is one of its most important areas of GIScience research (I may be slightly biased).  And with the ever increasing availability of movement data on a range of levels, the development of a model underlying this behaviour is ever more important.  So why can’t these two just get it on?

Well, the old argument has been that axial maps – the fundamental representation of space syntax – is simply not compatible with GIS.  Axial lines represent lines of sight, while GIS data segments are supposedly geographically accurate – at the level of network measures this difference is highly significant.  However, developments in space syntax – notably the development of Angular Segment Analysis by the brilliant Alasdair Turner, who very sadly died last week – mean that GIS integration is very much a possibility.

Turner’s approach was to measure the angular deviation between road segments on a GIS layer, assigning a score of zero for straight-ahead travel.  The greater the movement away from the straight line the higher the score, effectively yielding a new axial line.  Running angular betweenness (aka ‘choice’ in space syntax circles) calculations on the network yields some interesting results that I have discussed previously.  The story is clearly much more complex than this (and more can be read on this here).  But essentially this could be viewed as a new link between the traditional view of space syntax and GIScience.

ASA to the rescue?

However, some recent work I’ve been carrying out suggests that the picture is not so simple.  Specifically, it is not necessarily possible to run an Angular Segment Analysis on a raw GIS layer.  Taking the example of the OS ITN dataset – the most extensive representation of the UK road network – the presence of dual carriageways, roundabouts and other artefacts are contrary to what one would expect from an equivalent to the axial map.  And, indeed, betweeness measures on these networks do not inspire either, with strange variations across the datasets, notably across dual carriageways where big discrepancies can be found.

So, what can be the way forward here?  Well, I know that where ASA is used commercially, the underlying network model is initially simplified to remove dual carriageways and roundabouts.  But this seems awfully unscientific (well, maybe cartography isn’t particularly scientific either…).  My suggestion, and something I am currently pursuing, is usage of simpler, existing GIS datasets.  In this way, these models are already used widely and better validated than a subjective in-house alteration.  Yet, what about other models and datasets that require more extensive GIS data?  I suggest the development of tools that link together different GIS datasets, allowing an exchange of data yet not disrupting the validity of each approach.  We can even try to link the axial map back to a range of GIS layers, and truly gain an understanding about the strengths of these approaches.

This is something I’ll be working on over the next few months – so watch this space, or get in touch if you’re interested in this. 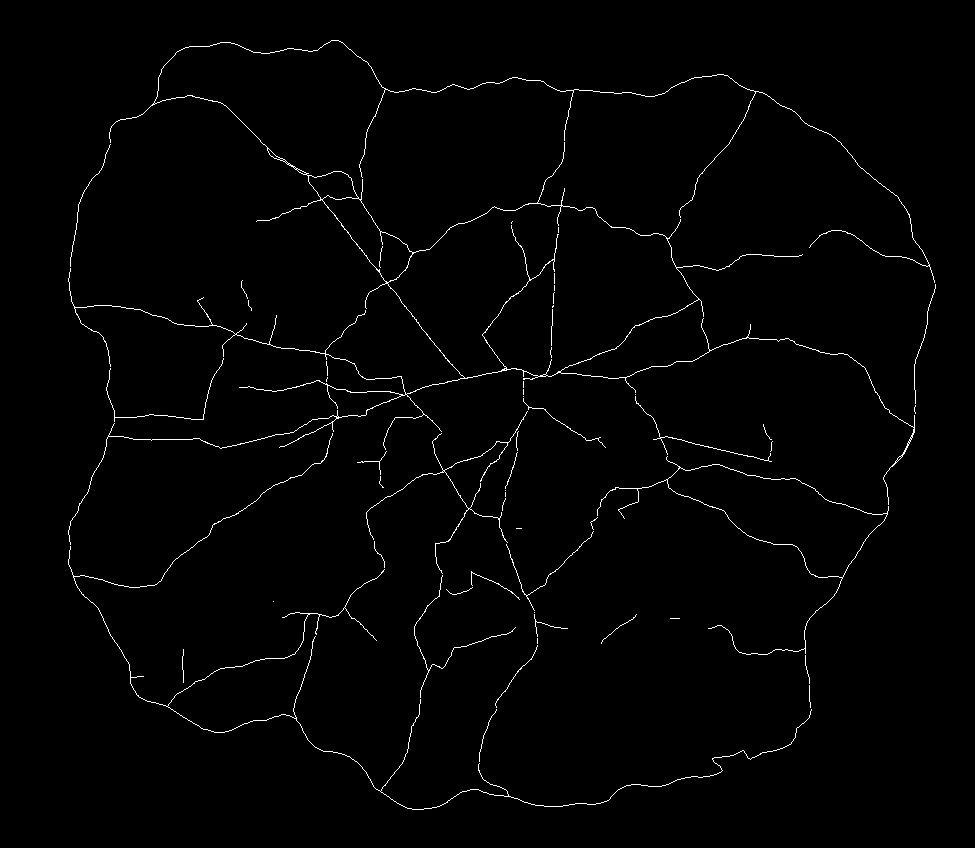 At the very broadest scope, Space Syntax can be said to investigate the relationship between movement and the configuration and connectivity of space.  In the past, while much favour has been found in the approach, critics have been distrustful of the axial line concept and of the representation of road segments as nodes in a network.  The construction of the network too, the process of drawing a network of longest lines of sight, has been seen to be unscientific.  Although I personally feel this to be a weak argument against Space Syntax in general, it’s acceptance into the wider research community may be hampered by this fact.

By way of a response to this argument, either intentionally or otherwise, there has been a movement towards segment-to-segment angularity (known as Angular Choice) as a predictor of movement.  The method is described by Turner in this paper, but in summary it is a calculation of betweenness on each network segment using the angular deviation between segments as the weight on which to calculate a shortest path.  The higher scoring segments, therefore, are those which are on a larger number of shortest angular paths passing over them.

One implication of this approach is that it a better fit for through-movement, that is an indicator of the routes we’re likely to use when moving from A to B.  This fits with what has been identified in other literature (particularly spatial cognition) where least angular change is identified as a driver of choice, notably in favour of pure metric distance.

So with a view to better understanding this relationship between the reality and angular choice, I wanted to compare the networks we find in the city and those indicated by this measure.  The first step was to draw out what traffic planners view as the most important roads on the network.  These are the roads identified in network as ‘Motorways’ and ‘A Roads’ (e.g. the ‘main’ roads), and as defined by the Department for Transport.  These were extracted and are as shown below:

The top 2% of these measures immediately draw out many of the most used and most well-known roads in London.  The M25 is prominent, as is the North Circular and various corridor roads into the city.  At 5% there is more definition of some of the other key roads, and by 10% we have a network that is quite similar to the map of ‘main’ roads in London.

By way of a statistically breakdown, the top 2% of values of the Choice measure predicts 76.3% of all ‘Motorway’ segments and 28.4% of all ‘A Roads’.  By 10%, these values have risen to 87.4% and 75.4% of all segments, respectively.  It is therefore clear that there is a correlation between this network measure and the definitions applied to the network.

I realise that this is a somewhat unrefined piece of work but I’d welcome any comments and am happy to share more on my method and results for those who are interested.