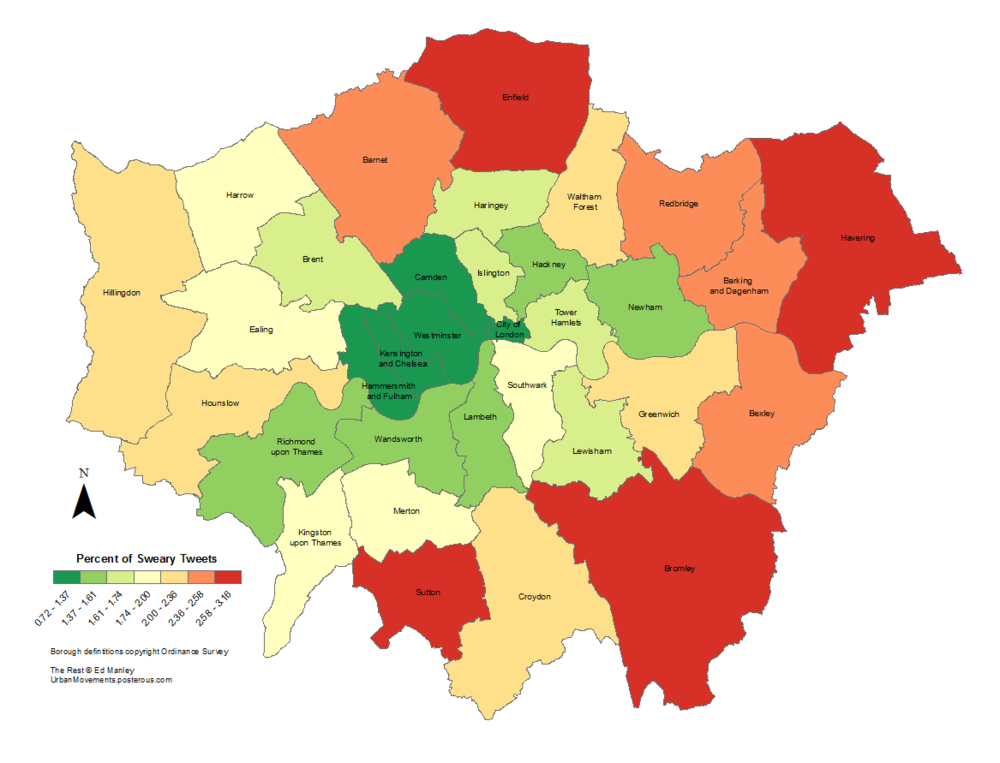 A couple of weeks ago, I put up a post detailing how swearing on Twitter increases during the course of the average day.  It seemed people get more angry and sweary outside of work time, rather than during.

To delve a little deeper in this topic, I’ve now had a look at where Twitter gets angry.  For each of London’s 33 boroughs I have carried out the same analysis – this time for a month’s worth of tweets – looking at the percentage of tweets containing swear words in each borough.  The results follow some interesting trends…

At least in the Twittersphere, inner London appears to be the veritable paradise of civility relative to the bile-filled tweet streams emanating from outer London.  The biggest offenders appear to be located to the east of city, with east London fairing considerably worse.  Yet the leafy boroughs of Barnet, Sutton and Bromley perform badly too.

Right, so let’s first look at what doesn’t seem to be going on here.  First off, the influence of this idea that people mostly swear from the comfort of their own sofa does not seem to hold very true.  There does not seem to be a very strong relationship between swearing density and residential locations.  If there were then you’d see higher scores in the likes of Haringey, Richmond, Hammersmith and Fulham and Newham. Nor does swearing follow any sort of deprivation index, again Haringey is relatively poor compared to the likes of Sutton, Bromley and Barnet, which fair much worse.

So what is going on?

In my opinion, what I think we are seeing is a reflection of demographic and cultural trends across these boroughs.  Taking demography in the first instance, according to the 2009 figures on nationality demographics at the borough level, those London boroughs with the highest percentages of British-born citizens are Havering, Bexley, Bromley and Sutton, respectively*.   It would make sense that the higher the percentage of British-born citizens in an area – on average those probably more likely to use an English swear word in a tweet – the greater the number of swearing tweets there are likely to be.  True, but I don’t think this tells the whole story.

Looking beyond these four boroughs, Kingston and Richmond also report high percentages of British citizens living within their boundaries – yet we don’t see similar volumes of sweary tweets coming from these boroughs.  How can this be so?  Make of this what you will, but beyond the demographic variation, the data appears to highlight a cultural variation across London in attitudes towards swearing in tweets.  Simply put, the data seems to suggest that the good residents of eastern and southern boroughs of outer London are generally more inclined to throw a swear word into a tweet than their counterparts over to the western side of London.

As I say, this is just my theory – there is a whole lot more you could do to this data to gain a better understanding of the trends observed here (unfortunately I don’t have the time to do so!).  I’d be very interested to hear any alternative ideas about what might be going on though.

Overall, I hope these analyses begin to give you an insight into the extent to which Twitter data (and other data sources like it) can be used to reveal and explain social, spatial and temporal trends. 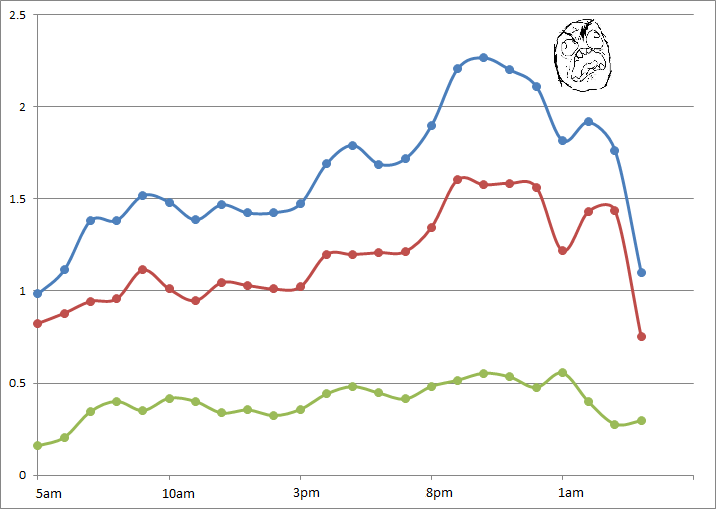 I’ve been spending a bit of time with Twitter data of late – perhaps not a healthy activity – but it is amazing what a rich data source of social and spatial behaviour it is.

Someone asked to me today whether it was possible to identify when and where Twitter gets angry.  Well, here is my answer to the first part – the when.

The graph below shows the variation, across the day, in the prevalence of swearing in the ‘Twittersphere’.  The data used represents tweets during two weeks in March 2012 covering London only – so maybe this is just when London gets angry…

In the graph we have the percentage of all tweets containing ALL types of swearing in blue, in red we have the prevalence of the f-word (by far the most common swear word), then finally the percent appearance of the s-word is shown in green.  Time is along the bottom.

Putting the slightly frivolous nature of this work aside for a second, the data does demonstrate some interesting trends.  There is a clear upward trend in ‘anger’ as the day goes on, reaching a peak at around 10pm.  But why is this?  Why do we swear more in the evening, when we should be relaxed and enjoying our precious free time?  Are we (we being Twitter users only, of course) swearing at the TV?  Arguing with our friends over Twitter?  Or are enough of us getting drunk and losing our inhibitions?

But I think this simple analysis gives us some insight into the way we use social media throughout the day.  During the day we think about work.  We tweet and communicate about work.  Yet in the evening, Twitter becomes a different place.  We let our guard down, and once we’re outside of the constraints of work, perhaps we begin to use Twitter in a different way.  Places like Twitter allow us the space to exclaim and let off our true feelings, whatever they may be, that might otherwise be constrained in other environments.

Twitter gets a lot of stick for its high volume of frivolous content – probably with good reason – but at a higher level some subtle but interesting social trends can start to be observed.